E.A. Sothern as The Crushed Tragedian

Buff Huntley
Metropolitan Washington, D.C., United States
Over-educated Anglophile, currently working as dramaturg for New Old Theater. I have a B.A. in Humanities from Georgetown University and Master's degrees in Research Studies and Victorian Literature from Oxford. I am an enthusiast of early theatre and have directed and/or produced a Jacobean masque, a baroque opera, a concert of music composed by women, and a canine melodrama. 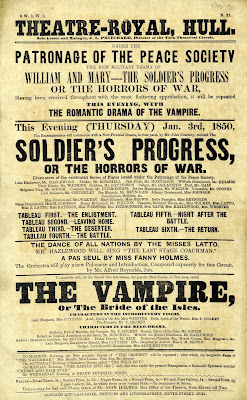 You see here a playbill from 1850, thirty years exactly after the debut of The Vampire; or the Bride of the Isles at the English Opera House. It still rates a large-print title. Planche's memoirs in 1872 state that the play "is a stock piece to this day." By the 1850s it was competing with Dion Boucicault's excellent version of the story, but continued to be a favourite.

Planche' himself had reworked the story twice more: once as the libretto of the opera Der Vampyr and later burlesquing his own production in Giovanni the Vampire!!! or, how shall we get rid of him? (text to the latter unfortunately lost to history).
Posted by Buff Huntley at 1:56 PM